There is something nostalgic and even romantic about the Great Lakes and the big boats that come and go each day carrying their heavy loads to unknown ports. Maybe it’s because of the many stories we’ve heard of violent storms and shipwrecks, or maybe it’s because the big freighters seem to stay in service and our memories a long time. For it is quite common and even a joy to see the same freighter working out on the lake for many decades. There are a lot of people that photograph and follow these freighters as a kind of hobby throughout their lifetime and even get kind of attached to them.

Recently, I read an article about the Saint Mary’s Challenger. After 107 years of moving freight on the Great Lakes, she would be converted to a barge. The article said she needed a new engine and many costly repairs and it would be more cost effective to just remove the old engine and pilothouse and use it as a barge. This would mark a sad ending for the crew and many followers of the oldest working freighter on the Great Lakes.

I remember the Challenger as a familiar friend that I would see from time to time, laboring out on Lake Michigan in my many travels north from Traverse City to Petoskey on US 31. I traveled that route for over 30 years for work and enjoyed seeing her moving through all kinds of weather out on the Lake. I’ll never forget the last time I saw her up close. It was from the deck of the schooner “Inland Seas” (the “Schoolship”).

That day started as a very cold, dark, and windy morning. It was my morning to teach the fish station on the Schoolship.  The date was May 23, 2013 but it felt more like early March. My thermometer read just 40 degrees and it was raining sideways with the wind. I put on my long johns under my jeans, grabbed my foul weather gear, a thermos of coffee, and prepared myself for one of those cold, finger numbing mornings out on the lake.

When I stepped outside in the driveway, the howling wind sent a chill clear through me. The smell and feeling of the cold crisp air transported me back many years to deer camp. I suddenly felt as if I was almost there, deer hunting with my father and brother in the Rattle Snake Hills, just outside Atlanta, Michigan. Isn’t it strange how just a smell or a feeling can trigger a memory in your brain so vivid that for a moment you are transported back in time?

I climbed in my truck and pointed it north towards Suttons Bay where I would meet up with the Schooner Inland Seas. Because of the high volume of students in the spring, the Schoolship also uses the Manitou out of Traverse City for its program. But today, as I pass the Manitou dock on West Grand Traverse Bay, I notice the large waves out on the Bay and I think to myself, I’m glad I am sailing on Suttons Bay today.

I arrive at the dock in Suttons Bay a little after 8 am and I am shocked to see the Saint Mary’s Challenger parked in the entrance to the bay. This is a really big freighter for such a small body of water and it reminds me of a “boat in a bottle” as it appears to almost block the entrance to the bay. It is motionless as it lies at anchor, safe for the moment, from the gale blowing out on the lake.

During our pre-trip briefing, we are told that the Manitou out of Traverse City is stuck in port because of the weather. The waves are much lower on Suttons Bay so we will be going out but we collect all of our samples except the fish sample dockside since it is just too rough to try and anchor. We will collect our fish sample with the Otter Trawl while motoring out into the bay.

When we have our fish sample it is time to raise the sails. The students report to their sail stations and as Captain Ben points us into the wind, its hand-over-hand on the halyards until the red sails are up. First the mainsail and then the Foresail. Both of which will be reefed today because of the wind. As the Captain turns us on a tack to take us across the bay, the sails suddenly catch the wind, billow, and we are off like a shot across the water.

The learning stations on the Schoolship are run every 15 minutes while under sail and include the fish station – my station today, Benthos, Water Chemistry, Plankton, Stewardship, and Seamanship – where the students can take turns at the ships wheel steering the boat. We have 6 stations and 5 groups of students so each of the instructors will have 15 minutes off during the sail to see what is going on around them. Since you only have 15 minutes to teach your station to each group, you really don’t have time for anything else.

When my break finally comes, I look around and I see the Challenger still sitting at anchor. I was so engrossed in teaching I had totally forgotten about her. I look back at the helm and see a couple of smiling and laughing students with their hands holding tightly to the wheel as we turn on another tack to take us across the bay. The sails catch the wind and the schooner with the red sails shoots across the water in front of the Challenger as if to say “come and play with us”. 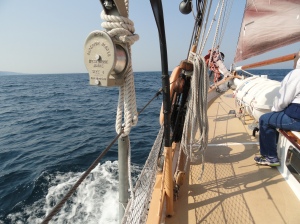 This is probably a sight that the Challenger has seen many times in its early days and I wonder if she is having one of those nostalgic moments. When she was  built in 1906 by the Great Lakes Engineering Works, Ecorse, MI, it was one of the largest and most powerful vessels on Lake Michigan and although freight hauling schooners were on their way out there were still many schooners on the lake.

As we reach the end of the bay once more, I watch as the enthusiastic students turn the wheel on another tack to take us once again past the Challenger. I watch as the sails swing across the deck now to the starboard side. They fill with wind, the boat heels and I grab the railing and hang on as we shoot out across the water in front of the Challenger again as if to say “come and catch us”. But the Challenger just sits there at anchor, for she is much too big to maneuver in such a small bay, and much too tired from fighting the gale out on Lake Michigan the day before.

The Challenger has had a hard life carrying its load of over 10,000 tons of cargo back and forth on Lake Michigan. She has fought gale force winds, monster waves, snow, ice storms, and was even hit by a water spout in 1997. She has run aground, hit a pier, and even survived a head on collision in a 1950’s snow storm with the Enders M. Voorhees in the Straits of Mackinaw.

The Saint Mary’s Challenger is the last active US flag freighter built before WW II and at 106 years old, one of the oldest working ships in the world. The end of this season on the lake she faces a decision by its owners to either upgrade her engine or turn her into a barge. Unfortunately for her, the latter was deemed to be her fate. 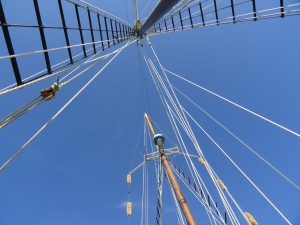 At the end of our morning Schoolship sail we tie up to the dock, disembark, and I begin the long walk back up the boardwalk along the wetlands to the parking lot and my truck. I take one last look over my shoulder at the Saint Mary’s Challenger and wonder what the people of Suttons Bay thought that morning when they awoke to see a huge freighter anchored in their bay. She certainly must have been the talk of the town.

I suppose she left that night after the winds died down. Not to any fanfare and probably unnoticed in the dark. She will raise her anchor, quietly back out of the entrance to the bay and point her bow north towards the open waters of Lake Michigan, not knowing what fate awaits her. She will slowly move away and disappear past Omena point, and will be gone.

2 thoughts on “The Schoolship and The Challenger”

Dispatches from the Field

The outside bend.
The Fisheries Blog

The Fisheries Blog: Your weekly spot for fun and engaging articles written by fish scientists from around the globe.