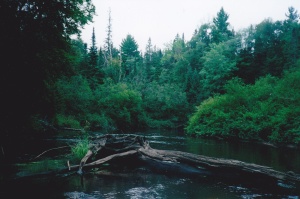 What is it about a place that beckons you back year after year? There are a lot of places in the Upper peninsula of Michigan that are very beautiful. In fact they are too many to mention. Is it the memories? Is it because it is familiar and you know what to expect? Is it a special feeling? Or something else you just can’t explain? The Two Hearted River is that special place for me. It is like a beacon that keeps calling me back.

The two Hearted River is small in comparison to many of the rivers in the UP, being only about 34 miles long, but it makes up for this in its beauty and character. It has several branches, but it is the main branch that flows into Lake Superior that I am especially fond of. I’ve canoed this section with one of my sons and fished and camped with both of my boys and two of my grandsons for several years.

This river in Northeast Luce County is one of the rivers in the UP that flows Northeast into Lake Superior. The UP of Michigan is unique in that driving East or West you may cross over one river flowing North into Lake Superior and the next river may be flowing South into Lake Michigan. The Two Hearted River drains an area of about 180 square miles and has a strong flow of cold water over a rust colored bottom of mostly sand with some pebbles in the runs and a lot of downed trees or dead falls, making this a great stream for Brook and Rainbow Trout. The North branch is clear at the headwaters but passes through fields of black spruce, balsam and tamarack and becomes light brown in color. The main branch has a great fall run of Steelhead and Salmon. Some of my best memories with my two boys are fishing here.

It is known that Salmon and Steelhead will return home to spawn in the very place they were born. It is believed that sometime during that first year of life the river is imprinted on them and guides them back. This may be a smell, a taste, a chemical composition, or all of these things together. Or it could be something we really don’t yet understand. Since we have lost that connection to nature thousands of years ago, we may never fully understand this. The salmon will travel downstream to Lake Superior where they will feed and grow for the next few years before returning in the fall. When returning, they swim along the shoreline looking for their river and will congregate there before making their run up-stream. 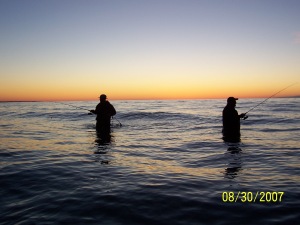 One of the unique things about the river is that just before emptying into Lake Superior it makes a turn east and runs for some distance parallel to the lake. The land between the river and the lake runs to a point where the river finally breaks free into Lake Superior. At the mouth, there is a State Forest campground and a suspended foot bridge that crosses the river so you can walk out on this finger of beach and dune separating the river from the lake. At the mouth there are usually fishermen fishing for Salmon and Steelhead in the surf.

“The Big Two Hearted River” was the title for a couple of short stories written by Ernest Hemingway in 1924 when he was just 25 years old which made this river famous. The story begins as he gets off the train in Seney, a lumber town that shortly before had burned to the ground. Nothing was left but a few cracked cement foundations. Everything was burned. Even the ground was burned off. He walks through town on a dirt road that runs north along the river and says to himself “I will keep going. It couldn’t all have burned”. He camps and fishes along the river for trout as he tries to put his military past behind him.

Of course most people today know he wasn’t really talking about the Two Hearted River at all but the Fox River which runs close to Seney. He said later that he really didn’t name the river he was fishing and that as a title “The Big Two Hearted River” was just poetry.

The Two Hearted River is no stranger to fire either. It too has had its share. On one of our camping and fishing trips here about 4 years ago there was a fire raging nearby and it was close enough for us to smell the smoke. We and other campers would check in at the Rainbow Lodge to get updates on the fire. The Rainbow Lodge was like a camp store with essentials, gas and canoe rentals and it was the only connection to the outside world in this remote area of the forest.

This area was able to dodge the fire that year but was not so lucky in 2012 when it was devastated by the “Duck Lake Fire”. It burned the forest right down to the river’s edge, then jumped the river and burned to the Lake Superior Shoreline just west of the park. They were able to save most of the park, with only the outer campsites being burned. The Rainbow lodge though, was burned to the ground. 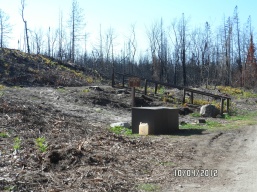 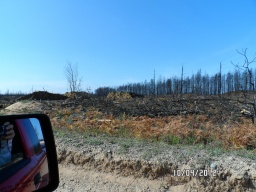 I visited the area that summer after the fire with my wife. The foot bridge was still there without too much damage. Standing on the bridge suspended above the middle of the river I looked up-stream. What was once a very beautiful place where the river comes flowing out of the dark forest I could see only the blackened trees on the hills on both sides of the river and it made me shiver. Certainly things will change here without the trees to hold back the sand.

My wife and I walked out on the sliver of sand separating Lake Superior and the river and there was one sole fisherman standing in the surf. I looked down at the river at my feet and noticed something wasn’t right. What was it? I got down on my knees to get a closer look. The color. The rust color of the bottom that I remembered was now dark and almost black. I looked closely at the bottom and discovered it was now covered in black soot from the fire. I got up and followed the river with my eyes out into Lake Superior and a thought occurred to. The Salmon! Will they be able to find there river this year? Certainly the smell, taste, and even the chemical makeup of the river was now changed.

Well, the Salmon did return that year. Somehow the river did summon them home. Much like it is summoning me now during this cold winter in Northern Michigan. I will return this summer to see how much Mother Nature has improved things and I am sure it will amaze me once again.

One thought on “A Big Two Hearted River”

Dispatches from the Field

The outside bend.
The Fisheries Blog

The Fisheries Blog: Your weekly spot for fun and engaging articles written by fish scientists from around the globe.